Last week I just happened upon the website of professional Lego modeller Eric Harshbarger, and more specifically, this page where he describes a miniature model of DNA built entirely of Lego. Well, I just had to have myself one of those, so I printed out Eric’s photograph and headed off to BrickLink to see if I could get the required bits.

A couple of days later (and many thanks to Simply Bricks and The Brick Shiphouse) I had several bags of brightly coloured bricks waiting for me and a molecular model to make: 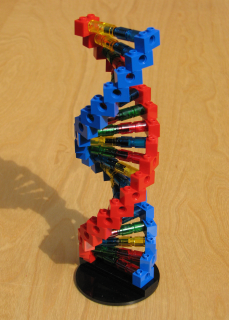 Isn’t it fantastic? Crick and Watson would be proud.

If you want to build your own Lego DNA model (and let’s face it, why wouldn’t you) here’s a handy shopping list; total cost for new bricks should be about £6:

As you can see from the photo, I built the two helices from different coloured bricks which makes them stand out quite nicely, so you’ll need twenty of each colour.

And for the base pairs: I don’t think there’s a universally accepted coding so pick four colours of your choice. Remember though that they only appear in two forms; Adenine only ever bonds with Thymine (A-T) and Guanine only ever bonds with Cytosine (G-C). Again, twenty of each colour is probably a good place to start; you’ll certainly have enough to spell out GATTACA.

Of course, you’re going to need to make about 220 million base pairs if you want to model your own DNA and that’s a whole lot of Lego…