Into The Mess That Scalpels Make

In 1992, The Sisters Of Mercy released a compilation album enitled Some Girls Wander By Mistake (from the lyrics to Leonard Cohen’s Teachers).  It included every Sisters track released from 1980 to 1983 and despite already owning most of these on 12″ vinyl I, like many fans, was delighted to finally get high quality, scratch-free recordings on a silver shiny disc. Some of the songs that appeared on the album were absolute classics – Body Electric, Anaconda, Alice, Burn, Temple Of Love – they were all there and they all sounded fantastic.

But what of the songs released after 1983? I assumed that a second compilation would surely be released and a year later one was – only it wasn’t quite what I was expecting. A Slight Case Of Overbombing was a ‘greatest hits’ collection (Volume One, apparently) and while it included all the singles, crucially it omitted the B-sides – which was a shame as there were some stunning tracks on the back of some of those discs.

In 2007, Rhino records released the Merciful Release boxed set containing the Sisters’ three studio albums and a smattering of extra tracks, including the B-sides to the two singles from First And Last And Always. My dream of getting the entire back catalogue on CD just got one step closer, but there were still a few tracks missing. Time to search eBay.

And so, twenty years after Some Girls Wander… was released, I’ve finally created its illegitimate sibling: Into The Mess That Scalpels Make. 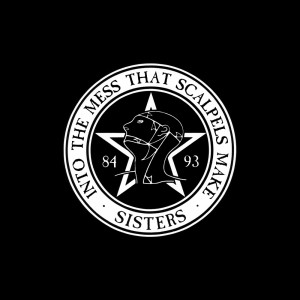 In creating this compilation, my goal was to bring together CD-quality versions of all the Sisters’ non-album releases post 1983; unfortunately I have failed on two counts. Firstly I’ve ignored some versions of some tracks, preferring to include just the 12″ releases where applicable. The running time is already excessive and I’ve no real desire to hear three versions of This Corrosion in the same sitting.

Secondly, there are still a handful of tracks for which no digital version has (to my knowledge) ever been released: inexplicably, the B-sides to the Body And Soul EP but also a couple of the ‘Live Bootleg Recordings’ churned out with Doctor Jeep. These non-digital tracks have been recorded off my vinyl copies using a Rega Planar 3 and a Behringer UFO-202, and cleaned up using Audacity; everything else is from a direct digital source be it the original CD singles, the Merciful Release boxed set or the Overbombing collection.

To my mind, there are four discs worth of tracks here; ordered chronologically they roughly span the Sisters’ three studio albums and the standalone releases that came afterwards. For your consideration:

When combined into a single playlist, Some Girls Wander By Mistake / Into The Mess That Scalpels Make forms a massive, four and a half hour ‘long train’ ride through the fourteen year release history of one of my favourite bands. With only a little bit of track reordering (Some Girls Wander… inexplicably puts the early singles at the end of the album) we can travel from the ramshackle engine shed that is The Damage Done, through the glorious landscape of The Reptile House EP, wave out of the window at three mighty fine studio albums before finally crashing into the buffers at the end of the line, ticket (or record contract) tattered and worthless.

The Sisters haven’t released any new recorded material for two decades now. They tour occasionally and play a handful of new songs, but for whatever reason, they seem to have no intention of ever letting a record company anywhere near them. For fans like me that’s a crying shame – who knows what wonders are lurking on Doktor Avalanche’s hard disk drive – but in the meantime, I now have the collection I always assumed would one day be released.